Juniors play on despite the wind and rain 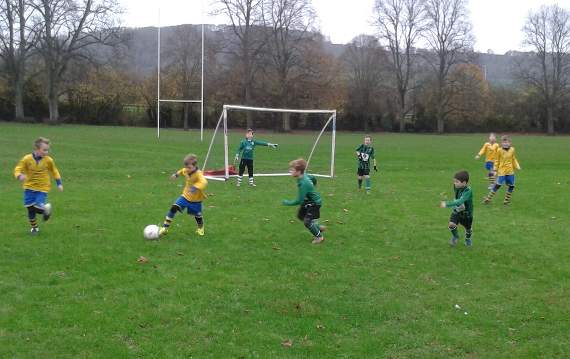 A COMBINATION of poor weather and unplayable pitches has made for a frustrating time over the past month for the junior footballers of Monmouth Town where, as some teams have played, others have not.

The under 12s have produced some good displays in recent weeks and were up against an in form Llanfoist. They were unable to overcome them going down 5-2. Despite this set back, the team remain in fourth place in the league and still in a good position if the top teams slip up.

The under 14s league has now split into two divisions after the initial first round of games. Monmouth Town’s under 14s are riding high in second place after only one loss in a successful start to their league campaign, but with no game last week for the under 14s it was down to the under 13s team to keep Chippy busy with more football. The youngsters, having also made the top division in this joint U13/U14 league after an impressive display of results against the older teams, a 4-1 win against Mardy two weeks ago had cemented their place in the top division. The under 13s couldn’t manage the double, as Mardy got their revenge with a 2-0 win.

Monmouth Town’s under 15s have found it more difficult this season also playing in an older age group and the County Cup winners from last season were unable to keep Abergavenny Town from recording a win.

Monmouth Town’s under 16s had no game last weekend, but are a creditable fourth place in their league.

Monmouth Town’s youngest players played their fixtures on the leisure centre astro turf last weekend as the recent poor weather has also made any quality football on the grass pitches difficult. The under 7s festival of football started things off on Saturday with players as young as five years old putting on the yellow kit of Monmouth Town. Sunday saw the under 10s and under 11s play out their fixtures on the astro turf with the under 8s and under 9s playing away.