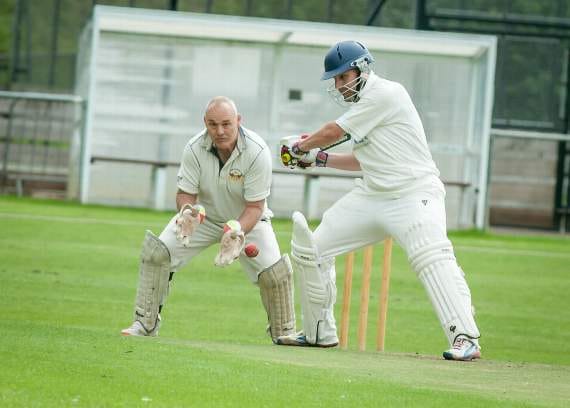 MONMOUTH Cricket Club’s First XI secured promotion to the top flight of the South East Wales Cricket League for the first time in their history on Saturday with a low scoring victory over fellow promotion chasers Crumlin.

On a surprisingly gloomy and wet day at the Sports Ground, Crumlin won the toss and asked the hosts to bat first on what looked a green wicket but one which was still firm and true. With regular opening bat Matt Jones away on holiday, along with captain Adam Roberts, a new look opening pair of Dave Teague (38) and Wales under-15 batsman Harry Friend were extremely watchful early on against a very accurate Crumlin seam attack that gave very little away.

In fact it wasn’t until the 21st over with the score on 51 that Friend edged behind a ball from spinner Connor Hopkins (2-34 off 10) for a well-made and hard fought 25. After a 45-minute break due to a heavy downpour, Monmouth continued to find the going tough, and despite starts for Shane Cloete (12), Henry Breeze (15) and Josh Grey (19), Monmouth couldn’t impose themselves on a bowling attack that was strangling the life out of the Monmouth innings. Chief perpetrators for Crumlin were Dai Evans (0-14 off 10), Kallum Williams (0-36 off nine), Ieuan Veall (1-30 off 10) and Josh Evans (2-9 off six) as Monmouth limped along to 115-4 at the 40 over mark. Monmouth then had to make the tricky call to protect wickets knowing that their opponents needed to bowl them out for their maximum five bowling bonus points if they were to stand any chance of catching them in the league. This led to a somewhat bizarre and very sedate last 10 overs that saw just 26 runs scored as Monmouth closed on a disappointing looking 141-7 off their allotted 50 overs.

In reply, Monmouth sponsored by Burkert Fluid Control Systems, knew that they were going to have to be at their very best defending such a low total, and when stand-in skipper Jon Roberts (1-9 off four) removed his opposite number I. Hopkins in the third over Monmouth had the perfect start. Fellow opening bowler Ben Pilot who was bowling with good pace and movement (3-21 off 6.4) then took two quick wickets to leave Crumlin reeling at 4-3. This however, brought to the crease Crumlin’s danger man and previous tormentor of Monmouth Simon Veall (25) who along with opener Josh Evans (10) put on 40 for the fourth wicket before Veall misjudged a David Teague arm ball and was stumped by wicket-keeper Jon Despontin for a well-made 25. Teague then continued to cause the Crumlin batsman trouble as he finished with figures of 3-20 off 10 accurate overs. A persistent clatter of wickets from Crumlin saw them slide to 54-5 and then to 83-8 inside just six overs, with Gloucestershire under-15 leg-spinner Sam Swingwood causing problems and chipping in with 3-28 off nine overs. In the end though it was Ben Pilot in his second spell that took the final wicket with the score on 95, trapping D. Evans leg before wicket and sparking scenes of celebration for what was not only a great comeback effort with the ball, but also because the 16 points achieved from the game guarantee the side a top two spot in Division Two and promotion next season.

Monmouth were much improved from last week in the field with catches taken by Josh Grey (2), Paul Swingwood, Dave Teague and wicket-keeper Jon Despontin. Next Saturday, Monmouth go in to the final game of the season needing a win to guarantee the Division Two title away at already relegated Barry Athletic and round off what has been a truly remarkable season for the club. All spectators are most welcome to come down to Barry Island to support, 12.30pm start.