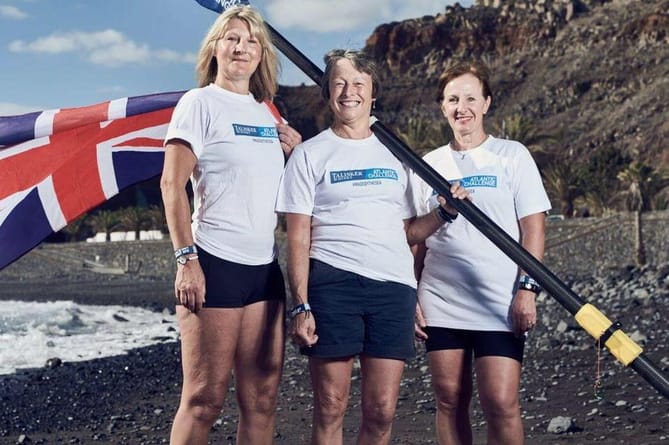 RACING across the ocean in a rowing boat has only ‘wetted’ Wye rower Elaine Theaker’s appetite for more thrills and spills on the sea.

Having set records in her three-woman masters boat four years ago crossing the Atlantic, The Monmouth RC member is now aiming to launch out in a four-crew boat more than 2,800 miles across the Pacific.

Her Flyin’ Fish boat will be racing in the first ever Pacific Challenge 2023 race from Monterey in California to Nawiliwili in the Hawaiian Islands, starting in a year’s time this week (June 12).

The crew tried out their 8m long Voyager craft for the first time off the Devon and Cornish coast last month.

And solicitor and mum-of-one Elaine, who is retiring from work this month, is joined on board by ocean row veterans Alison Wannell who lives in Devon and works for Devon Air Ambulance, former firefighter Neil Blackeby from Cornwall, and truck driver Andy Warner from Hampshire.

Elaine will be celebrating her 60th birthday at sea next year, and admits: “It’s that time of my life again when I have to go off and do something a bit daft.”

Only 80 people have ever previously rowed from the US mainland to the Hawaiian islands, but despite rowing over the deepest, most hostile ocean notorious for huge seas, she and her crew are hoping to complete the challenge and raise a boatful of money for the Air Ambulance UK.

Elaine, who started rowing at Monmouth Rowing Club, took 60 days to cross the Atlantic, including over Christmas, just over four years ago, with Shropshire crewmates Di Carrington, 62, and Sharon Magrath, 55.

The row saw them endure “waves the size of tower blocks” crashing down with “the force of a train”, plus beautiful sunsets, visits from whales and dolphins and flying fish jumping into their self-righting 27ft-long boat.

Having already started training and preparing for next year’s challenge, Elaine and her crew posted: “The team has returned from an awesome first weekend’s training…

“We rowed from Plymouth, Devon, to Fowey in Cornwall and back the next day.

“It’s been between three and six years since the crew members stepped off their respective Atlantic boats, but the routines came back quickly, as did the blisters!”

For more information about the new row, see www.facebook.com/TeamFlyinFish and www.taliskerwhiskyatlanticchallenge.com/the-pacific/

Pictured Elain with her Atlantic crew