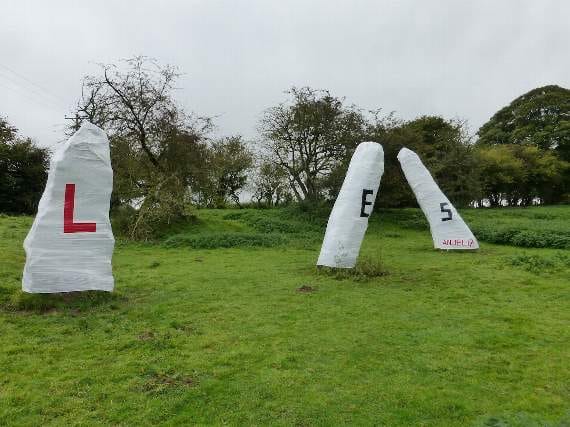 THE mystery of the embellishment of the three standing stones at Trellech can now be revealed.

Last week, the Beacon reported on the mysterious appearance of a white plastic wrap around the Trellech stones with letters spelling out what could have been a name, ‘LES’.

It has now been confirmed that the adornment was in memory of Les Morgan, a 47 year-old Monmouth man who died of cancer 12 months ago to the day that the white plastic appeared on the stones.

According to his father, Phillip ‘Moggsy’ Morgan, Les used to spend a lot of time sitting next to the stones drawing strength from them as, from childhood, his health had never been the best.

Suffering from neutropenia as a child where there are an unusually low number of cells called neutrophils which help the immune system combat bacteria, he always went to the summer and winter Solstice at Stonehenge as well as Glastonbury.

Ancient stones are often thought to have hidden powers of healing and according to Geoffrey of Monmouth, the rocks of Stonehenge were healing rocks. Les also had strong spiritual beliefs, again a significance that surrounds ancient sites such as Stonehenge and the mystery of the three standing stones of Trellech.

However, time ran out for him and he was told he had cancer in 2016 after fighting a long battle with professionals to be seen. Phillip told the Beacon: “Les had been going to the hospital for two to three years saying he was not feeling well, but was always told by the doctors there was nothing wrong with him and to go back home. Then it was only a month before he died that it was confirmed he had cancer”.

His father Phillip had also been given a diagnosis of cancer and for a while, the two were treated by the same consultant at Nevill Hall. Phillip’s cancer was caught in time and there was some success in his treatment. But Les was not so fortunate, and following the CT scan in September 2016, he was told that the severity of his case meant the cancer had spread to his lungs and liver.

From diagnosis to his death, Les survived for just one month, during which he was kept in hospital, unable to return to draw any strength from the stones that he found so much consolation from.

He died in his father’s arms on 1st October 2016 at 47, and was given a natural burial in Usk, leaving behind two children, Kyan Morgan aged 10, and Chelsea-May Neville, 17.

Phillip told the Beacon that, “a father should never have to see his son die” and knows that the tribute to his son at Trellech last week was made with all the dignity and courage that his son showed throughout his short life.

An anonymous letter to this paper received this week said that the adornment of the Trellech Stones with the letters LES may have been a mystery to some, but not a lot of people: “Somehow, someway, it is beautiful and a respectful way of showing appreciation to a loved one whom is missed,” it said.