Fundraising pair pedal to the palace for Well Child charity 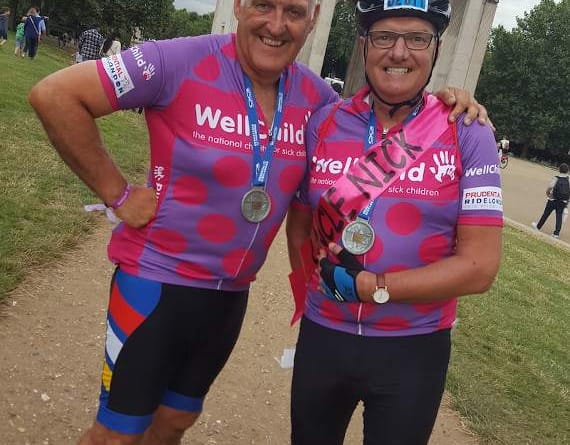 MONMOUTH fundraisers Adrian Whitehead and Nick Goodall competed in the cycling equivalent of the London Marathon on Sunday 31st July at the Prudential Ride 100.

The pair rode a gruelling 100 miles through the closed streets of the capital and Surrey and finishing outside Buckingham Palace, while raising money for the amazing charity Well Child.

Adrian finishing in six hours and 20 minutes and said: “Although it was gruelling, aggressive and very tough riding so far for a great charity, it felt incredible racing down the mall heading for the finish as people in their hundreds cheered all the way to Buckingham Palace. It was just a brilliant feeling.”

The regular fundraisers are no stranger to raising cash for a good cause, having taken part in the Monte Carlo or Bust banger race from Namur in Belgium to Monte Carlo more than once as part of ‘the Moosers’ team.

This year Adrian himself has raised more than £800.

You can sponsor him at www.goo.gl/WgZwky