Fugitives run away with it 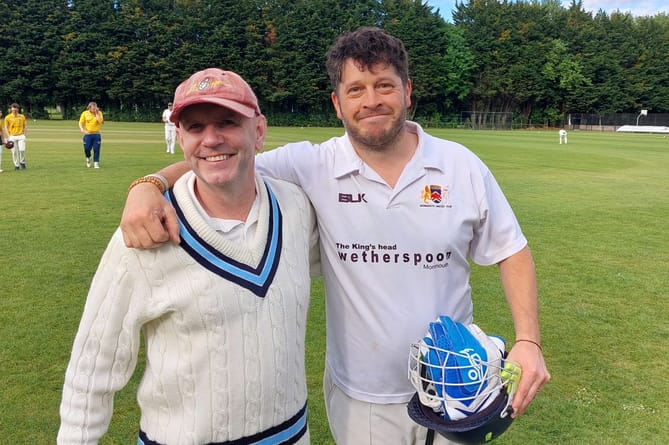 Despite a bright opening stand from Matthew Jones with 30 and David Teague with 24, a spirited Monmouth, sponsored by Bürkert Fluid Control Systems, lost wickets regularly and were dismissed for 159.

But the home side were tied down and eventually dismissed in the 33rd over.

Earlier, Jones was in dominant mood for Fugitives, particularly in the second half of his 146-ball innings, as Monmouth’s bowlers and fielders toiled on a warm afternoon.

Aled Jones (2-57) was Monmouth’s most successful bowler, while Duncan Delreeve (1-30 from seven overs) and Roberts (1-34 from eight) also chipped in with a wicket in the Monmouthshire Building Society-sponsored match.

All-rounder Will Cass, in his first appearance of the summer, struck a magnificent half-century in Monmouth 2nds hard-fought and exciting eight-run home win against Monkswood-Panteg Seconds in a re-arranged King’s Head Hotel – JD Wetherspoon-sponsored Division 9 clash on Sunday.

Teenager Sam Brennan (0-23) showed nerves of steel when he was asked to bowl the final over of the match with the visitors needing 15 runs to win - and he conceded just six.

Stand-in captain Rick Parkes, making his first appearance of the season, was delighted to guide the team to their first league win of the campaign.

Cass hit a superb 61 and was backed up by opener Nick Robinson (32) and the returning Gareth Hughes (17) in guiding Monmouth to a competitive 160 all out.

Robinson and Greg Thomas each held important catches and, with Brennan’s accurate final over, a jubilant Monmouth restricted Monkswood-Panteg to 152-4 from 40 overs.

The previous day, a whirlwind 73 from skipper Barry Jones could not prevent the 2nds from a seven-wicket defeat away to Llandaff 4ths.

Jones blasted 15 boundaries in his 58-ball knock that got Monmouth’s innings off to a rip-roaring start in Cardiff.

After Jones was caught, however, only Matt Williams (22) and Wilton (10) reached double figures and Monmouth were bowled out for 141 in 33 overs.

In reply, Wilton bowled tidily for Monmouth, picking up 2-37, while Jaycob Harrington took 1-35 and there were good catches from wicketkeeper Robinson and Thomas.

But Naeem Khan smashed a quick-fire 57 not out to propel Llandaff to the target.

Newcomer Corey Oates snapped up 4-34, but Monmouth 3rds went down by 137 runs at Abercarn 2nds in Division 12 in a match sponsored by Monmouth Dental Practice.

Oates shone against his former club in an excellent eight-over stint, while captain Helen McGloin (2-29), Paul Dunsford (1-20), Simon Kidd (1-42 from eight overs) and Rob Pendleton (0-15 from eight) also excelled as Monmouth restricted the hosts to 195-8.

After the interval, Oates top-scored with 17 but Abercarn’s accurate bowlers caused havoc and Monmouth were bundled out for 58 in the 28th over.

To get involved at Monmouth Cricket Club, contact chairman Joe Atkinson by emailing [email protected] or call him on 07502 347780.