Monmouth edge closer to title as match rained off 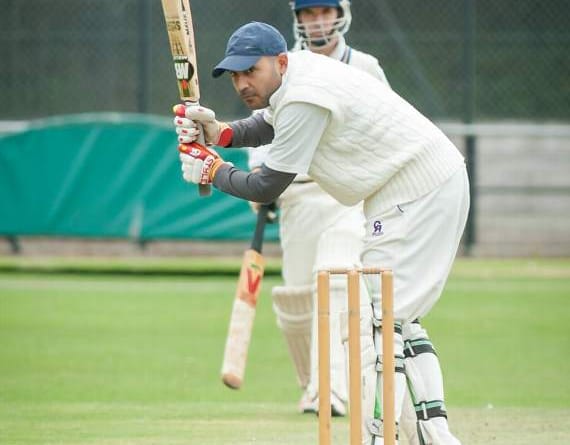 Alim Hansraj hit 28 not out

MONMOUTH Cricket Club First XI edged closer to their title dream on Saturday despite the persistent rain across the region having the final say, as their Division Two clash at home to Central Cardiff CC was abandoned just five overs into the visitors’ innings.

With title rivals Blackwood and Crumlin both washed out without a ball being bowled, Monmouth, sponsored by Burkert Fluid Control Solutions, were fortunate that the inevitable rain did not reach the Sportsground until much later in the afternoon, and having lost the toss it was no surprise that the visitors asked Monmouth to bat first under grey and gloomy skies.

A new-look opening partnership of Matt Jones (59) and Sam Swingwood took to the field, and Swingwood (3) fell early to one that left him and an excellent catch taken by Santosh Singh in the slips off the bowling of Kamran Khan (1-22 from six overs). This brought the returning Henry Breeze (25) to the crease and he and Jones took the score to 49 before Breeze went back to a full delivery and had his stumps rearranged by the probing line of Nazir Ahmed (1-38 from nine overs). When skipper Adam Roberts was adjudged lbw for 0 for the second week running, shortly followed by Josh Grey who was dismissed for 5, Central Cardiff were clearly on top as the score reached 88-4 at the 23-over stage.

This brought to the crease Wales under-14 wicketkeeper batsman Harry Hughes who stunned the visiting attack by not only getting off the mark with a huge six over mid-wicket but through some impressive footwork down the wicket, taking the attack to a strong spin attack in what proved to be a highly entertaining 33 from just 42 balls – an innings which showed enormous potential for the future. Meanwhile, Matt Jones continued to remain the bedrock of the Monmouth innings, and when he was bowled by Syed Gilliani for a well-made 59, Monmouth were still short of a par score at 145-6. However, thanks to contributions from Wales under-15 wicket-keeper batsman Joe Harris (14) and a return-to-form innings of 28 not out from Alim Hansraj, Monmouth were able to grind their way to what seemed a decent score of 204-9 after their allotted 50 overs. For the visitors the pick of the bowlers were Muhammed Rehman (2-34 off nine), Usman Niaz (2-33 off eight) and Syed Gilliani (2-19 off seven).

With the rain just arriving at the tea break, it looked likely that there would be no more play. However, a short interlude between showers saw the Central Cardiff batsman take to the field for just five overs in which former Sully Centurions batsman Santosh Singh (18 not out) played some impressive shots before the rain returned for good this time with Central Cardiff having started strongly on 21-0 off five overs. The result saw both sides awarded nine points and means Monmouth are 20 ahead of Blackwood in second and 33 ahead of Crumlin in third. It all means that Monmouth now require 27 more points from their remaining three games to guarantee a top two promotion spot, and 41 more points to see the Division Two title come their way in what would be a truly remarkable achievement from a side that finished third in Division Three last season. Next Saturday though Monmouth travel to Rogerstone for what will be undoubtedly another tough fixture with the hosts currently in a battle to avoid relegation.