Free community and arts festival to return this month 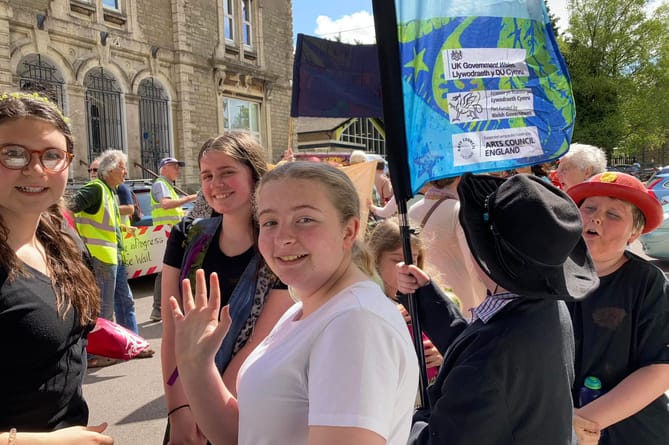 Local community groups have been working with the Wye Valley River Festival team to create amazing work celebrating landscape and nature ranging from giant silk banners to group performance pieces to be part of the free community arts and environment festival, which returns this month.

The popular open access festival will kick off on Friday May 27 to help audiences re-connect after the pandemic through a programme of vibrant and innovative shows, workshops, performances, installations and film running at venues from Hereford to Chepstow until Sunday, June 5.

For 2022, the organisers have responded to public demand to create more opportunities to get involved throughout the year. Since January under a new initiative, five locally-based artists have been working as “creative community champions” to encourage participation in the arts and to create work based on the issues our environment and people living in the region face.

The 2022 festival is inspired by the theme of Human Nature. WVRF artistic director Phillippa Haynes said: “We want audiences to be entertained, moved, engaged and inspired by an ‘interactive celebration and exploration’ of the region’s landscape and wildlife.”

Among the creative community champions, Forest of Dean-based Chez Dunford has led the Exploring Thrutopia project, which encourages people to explore the relationship and balance of human nature in the Wye Valley through creative games and performing arts. Working with Brockweir Youth Club, Engage Youth Circus at Cinderford Arts Space, Monmouth-based Savoy Youth Theatre and the Kangaroo Choir from Redbrook, Chez has helped the groups prepare performance pieces that will be showcased at the festival. Their work has also contributed to the Wye Valley River festivals professional performance troupe, The Bikesplorers.

Chez said: “Coming out of the pandemic, we have got the young people to express their joy at the natural world around while exploring the idea of a climate ‘thrutopia’, which is neither a utopian future nor a dystopian one. Our legacy will be encouraging our groups to think positively with gratitude for the many good things in our region.”

Visual artist Catherine Hawkridge, based in Tutshill, near Chepstow, has delivered I Live Here, a creative project encouraging young people at schools, clubs and youth groups, to respond to the festival theme. The work created has included collages, poetry and paintings, all featuring their personal responses to the local nature, scenery and wildlife.

Catherine said: “The engagement has been fantastic, particularly where schools have got involved and integrated the project into their studies. We are creating a trail throughout the lower Wye Valley, allowing people to scan QR codes at key points such as art galleries and shops and see the collected artworks of local young people relevant to that place.”

Artist Aimee Blease-Bourne, based in Redbrook, has worked with youth groups in Monmouth and Hereford to create Queering the Wye Valley, a project aimed at giving voices to young LGBTQI+ people living in the region. Having collated the ideas and concerns of LGBTQI+ young people, based on their experiences in rural communities, the groups have created art cards depicting diversity in nature, along with podcasts and soundscapes.

Aimee said: “For local young people there are barriers to being able to celebrate themselves, including a lack of safe spaces for LGBTQI+ people in rural communities. By exploring these issues and looking at the nature around us, we are creating an artistic legacy of different voices, based on their experiences in the Wye Valley.”

Artist and printmaker Nichola Goff has created silk banners depicting Human Nature and youth identity with groups at the Attik youth centre in Monmouth, Redbrook Youth Group, Ross-on-Wye Basement Trust and Thornwell Youth Centre in Chepstow, which will go on display around the region. The banners will also be carried by young people during Festival parades

On May 28, Monmouth will host a Merry Mischief Day and on June 3 Ross-on-Wye hosts the Streets of Ross, both will see interactive circus acts and street theatre.

, music and parades take over the streets. Cycling performers the Bikesplorers will tour throughout the festival along a 65-mile route, putting on pop-up performances.

Redbrook-based Nichola said: “Most of the young people taking part had never done screen printing before so our project has helped them build new skills. It is exciting to see our project come together as it brings together groups to share their views of the world around them.”

Claudia Peake has led diverse community groups in reimagining the space around St Saviour’s Church in Redbrook with her visual arts project ‘Altered places, changing spaces’. Working with partners ranging from Redbrook Village Trust to Redbrook Primary School, the project has seen artwork created on public buildings and 16 concrete bollards repainted. Events including a foraging have been held since the project kicked off during the spring.

Claudia said: “We are encouraging people to release they can instigate chance through the arts. Through the Festival it has been fantastic to work with people who would not normally see themselves as creative or want to be involved in arts projects.”

The festival is organised by Wye Valley River Festival CIC, an innovative arts organisation, led by artists and communities creating work on environmental themes. The WVRF has been held every two years since 2014 but the 2022 event will be the first live festival to be staged since 2018. The festival moved to a digital version in 2020 due to Covid-19.

WVRF Director Phillippa Haynes said: “Our five creative community champion projects have been a great addition to our outreach programme. The Festival aims to connect communities, inspire and support creativity, working with partners to make arts accessible for all and embedding new skills that support individuals on their personal creative journeys. The creative community champions have been brilliant at developing new local creative connections, beyond the Festival programme, reaching new audiences for our work and hopefully fostering a deeper appreciation of the environment.”

On May 28, Monmouth will host a Merry Mischief Day and on June 3rd Ross-on-Wye hosts the Streets of Ross, both will see interactive circus acts, street theatre, music and parades take over the streets. Cycling performers the Bikesplorers will tour throughout the festival along a 65-mile route, putting on pop-up performances.

Interactive performers Red Herring will perform as the Whistler Conservation Society at Symonds Yat Rock on June 3. Appearing as “the elusive Whistlers”, a remote whistling community, audiences will hear their “extraordinary whistling language” up close. On June 4 Ross-on-Wye will host quirky street theatre, wild circus, and local celebration, alongside artists and performers will be making and presenting work around the market town and in the Prospect Gardens of St Mary’s Church.

The first Wye Valley River Festival was created and developed in partnership by the Wye Valley Area of Outstanding Natural Beauty (AONB). It is funded by the UK Community Renewal Fund, Arts Council England, the Sustainable Development Fund, the Welsh Government and Forestry England.

Most events are free to attend and do not require tickets, except for the Whistlers shows which need to be prebooked. Access to the sound installation at Tintern is included with the entry ticket to the Abbey, available on the door or online.