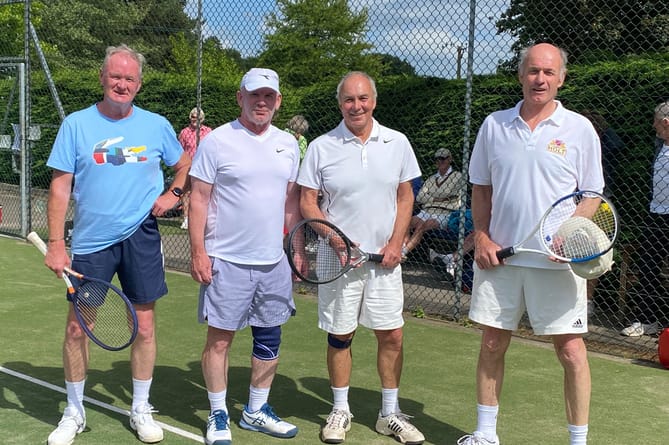 Rachel Ryder and daughter Lola got to the final of the main ladies competition where they went down fighting against the defending champions Caroline Peters and Steph Howell.

Caroline and Steph had got through a closer semi-final against Nicky Amery and Katie Farrington having to work hard to overturn a deficit in the second set before finally winning 6-4, 7-5.

The other mother and daughter combination of Bev and Jemima Leaf won the Plate final in a long three set match 6-2, 5-7, 1-0 against Juliet Bucknall playing with club chairman Rosie Adams, who had come through a closely contested semi-final against the wily pairing of Joan Hollick and Lynda Thornycroft to win 6-3, 7-5.

The men’s competition featured a couple of closely contested semi-finals followed by rather one-sided finals.

In the Plate, Martin Dean and Mark Thornycroft played a tense semi-final match against Pete Bryden and Chesney Britton, culminating in an entertaining second set tie-break, which they won 6-4, 7-6.

They went on to beat the Narth pairing of Jeff Goodlass and Jon Dunkelman 6-2, 6-2 in the final.

In the main draw of the Men’s Doubles John Howells and Neil O’Doherty were emphatic winners, playing aggressive but consistent and controlled tennis dropping only two games throughout.

They beat the veteran pairing of Chris Hollick and Chris Adams in the final 6-0, 6-1.

The older men had rather surprisingly reached the final by defeating Rob Prewett and Paul Hazlewood in a topsy turvy semi-final 4-6, 7-5, 1-0.