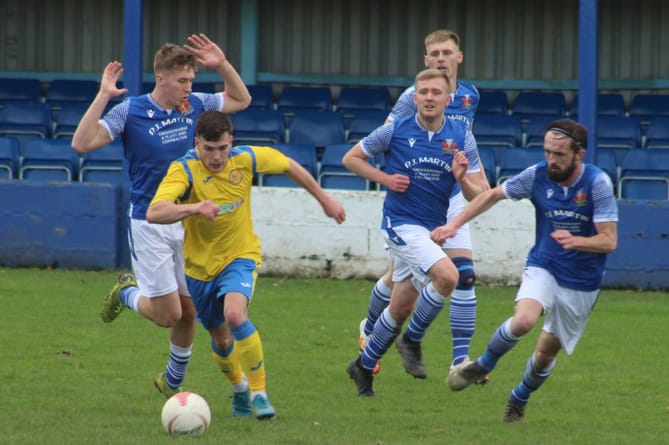 THE Kingfishers went into Saturday’s away game in Mid Wales having not scored in 198 minutes of football, so it was imperative they got a goal to boost their confidence, writes Nick Hartland.

After a two-hour journey, the Monmouth players were keen to start the game strong and pen Llandrindod back early, knowing defensively they were still looking strong having only conceded one goal in the last three games.Veteran Dean Palmer was brought into the starting XI to join the experienced back three, the combined age for those four players totalling some 138 years.It was an even first half with Monmouth taking control of possession but having to be cautious of balls over the top from the home team on the break.But again the Kingfishers lacked that clinical finish, creating plenty of chances but not taking them, with shots going just wide of the target.Wells, whose pitch is on a slope, looked to capitalise on kicking uphill in the first half with their long balls holding up on the very soft pitch.But any threat the home team caused was swiftly cleared up by the ’old guard’ at the back with keeper Travis Wood not having a save to make in the first half.After the break it was a case of as you were for Monmouth with several more chances going begging, including a disallowed goal after a Wells defender took a poor first touch in the box, which the onrushing Paolo Marenghi slotted past the keeper, only for the referee to claim the striker had fouled the defender, much to the astonishment of the players.Finally after 264 minutes of scoreless play for the Kingfishers, Marenghi broke the deadlock, heading home from six yards out after a Lyndon Jones corner was nodded across goal by Rob Laurie.The goal gave the away team the boost they needed and only four minutes later the Kingfishers No 9 bagged his second of the game, breaking the Wells back line before smashing the ball past the home keeper’s desperate dive.For the final 10 minutes Monmouth seemed to back off, allowing Wells to see an effort superbly tipped onto the bar by Wood in goal and a clearance athletically cleared off the line by captain Ash Ford.Overall it was a comfortable win for the Kingfishers and one that was well overdue.Next weekend they are at home to table topping Abertillery Bluebirds, who will be wanting a response after losing to league favourites Goytre AFC 6-0 at the weekend.Manager Scott Russell said of the victory; "It was a good win. I felt fairly comfortable we would win but with the team not scoring in the previous two games you could sense the longer the game went on, more doubt would start creeping in, which you’d expect after such a barren spell."We went with experience today and I think it worked well, as to a man they all played well."Yes we still need to be more clinical in front of goal, but it gives us confidence now when we play the Bluebirds, as those are the games we will be needing to win if we want to keep moving up the table and be in the mix at the end of the season."Ardal South EastLlandrindod Wells 0 Monmouth Town FC 2