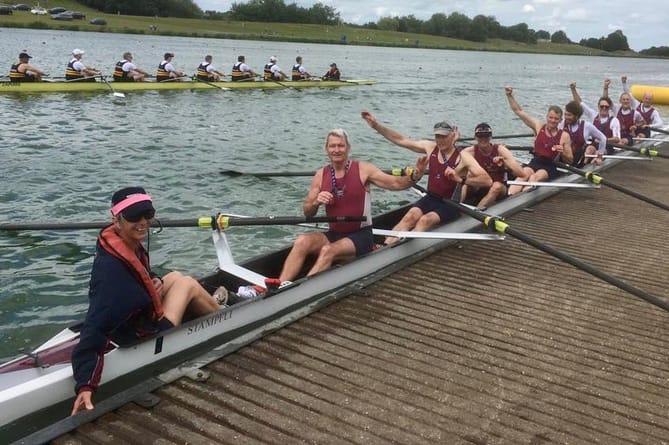 Racing into a strong headwind, the men’s coxless D (over-50 average age) four of Athens Olympian Tim Male, Simon Lee, Paul Bezani and James Allison comfortably qualified for the final in a time of 3mins 53.97secs in the first race at 9am.

Two races later, the F (over-60) four of Andrew Barnett, Nick Hooton, Colin Lewis and Jonathan Keyte also secured their place in their six-boat final in a time of 4.02.67.

The first final of the morning for a Monmouth crew saw ladies’ captain Liz Lewis and Louise Allison power to victory in a their F coxless pair in a time of 5.02.01, pushing a strong Weybridge duo into second by 2L.

But the F men’s four then failed to make the podium in their final, coming a disappointing fifth just three-quarters of a second off third, and felt frustrated that they hadn’t executed their race plan well enough.

There were no such problems for the D four though, as they stormed to gold in 3.55.84 by 1L from Bewl Bridge and 1 1/4L from Minerva Bath.

A new look men’s masters coxed D4 of newly-wed Matt Winters, Lee, Bezani, Allison and cox Sara Part were unable to qualify from their heat despite posting a time of 4.04.93.

But taking part in her first multi-lane regatta, relative novice Rachel Westerlund then coped very well with the tricky conditions to race to a well deserved and impressive third place in Intermediate women’s A-C singles (over 27) behind Bewdley and Twickenham scullers and just ahead of a California racer, finishing in 5.25.43.

The men from the F4 were then asked to park their frustrations as they joined Louise Allison, Dawn Brace, Kate Hooton, Liz Lewis and cox Darcy Birkett in a mixed masters E eight.

The crew led all the way off the blocks to the medal podium, winning by over 2L from second-placed Ancholme in a time of 3.49.36.

And that was matched by the men’s D eight of Andrew Barnett, Nick Hooton, Matt Winters, Simon Lee, Tom Griffiths, Paul Bezani, James Allison and cox Liz Lewis who came through the qualifier to then grab bronze in the final in 3.38.10 behind a Notts & Union crew packed with former GB stars and Ireland’s Portora.

Club coach Tim Male was generally satisfied with the performances, but all crews know there is more work to do on and off the water before Henley Masters in July.