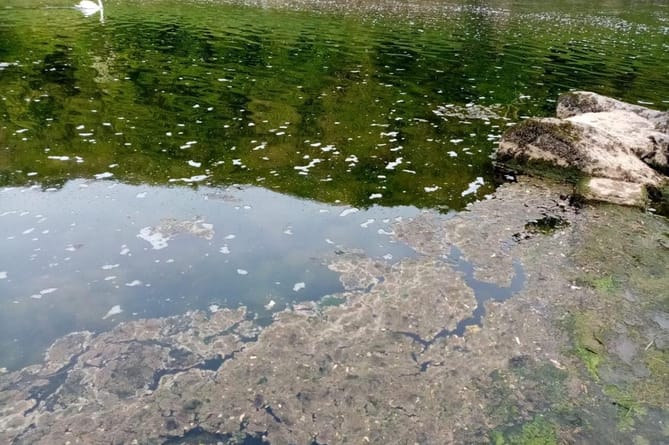 Natural Resources Wales say an investigation into the suspected “significant flow of raw sewage” at Redbrook Fisheries was only algae and bacteria.

Friends of the Lower Wye publicised the suspected contaminated water and claimed the river had “no chance of surviving”.

But NRW say they have examined the stretch of river on the Monmouthshire/Gloucestershire border and dismissed claims of sewage.

NRW environment team leader Holly Sisley said: “On Monday we received reports of a potential pollution incident along the border of the river Wye at Redbook, following sightings of scum on the surface of the water.

“Officers attended the site swiftly to carry out an investigation, and we can confirm that the scum is not sewerage, but a combination of algae and bacteria

“Similar reports have been received by the Environment Agency (EA) upstream and water samples analysed by the EA have confirmed that the algae is likely to be Oscillatoria, which is non-toxic and can often occur in rivers during hot or sunny weather.

“Inspections of storm outfalls in the vicinity were also carried but no discharge was found.

“Thank you to everyone who took the time to report this to us. We would encourage anyone to report signs of pollution to us on 0300 065 3000, or via the report it form on our website so we can respond as quickly as possible.”

The orginal post on the Friends of the Lower Wye’s Facebook page along with a photo showing brown material on the surface of the water said: “7am this morning (Monday, May 9), raw sewage passing by Redbrook… How can this happen? Welsh Water cannot blame the amount of rain, surely…

“It was definitely sewage, as the photographer has lived and fished by the river for 45 years, so has seen it all.”

A spokesman for Welsh Water confirmed there were no storm discharges from the Newland Treatment Works.

Anyone suspecting a spill can report pollution incidents to the Environment Agency by calling 0800 807060.

* The Action on Climate Emergency Monmouth monthly meeting to discuss plans for the next three years is on Tuesday, May 24, at 7.30pm at St James Hall, Wyesham. All are welcome.