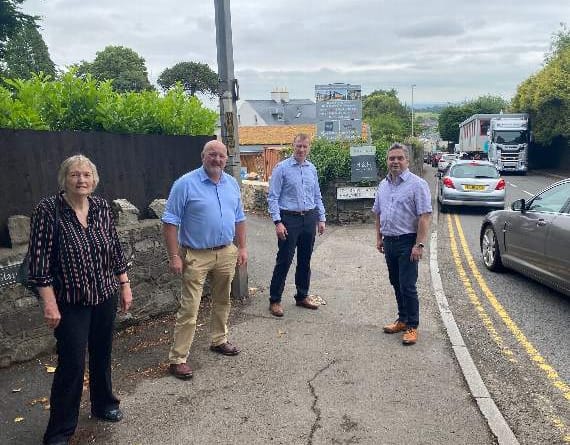 To mark World Clean Air Day Peter Fox, Member of the Senedd for the Monmouth constituency, today met with councillors Christopher Edwards, Paul Pavia and Louise Brown at Hardwick Hill, Bulwark to call for a by-pass for the town

Leading Monmouthshire politicians have today called for the immediate prioritisation of the building of the Chepstow Bypass.

To mark World Clean Air Day Peter Fox, Member of the Senedd for the Monmouth constituency, today met with councillors Christopher Edwards, Paul Pavia and Louise Brown at Hardwick Hill, Bulwark, where they unanimously called for the Chepstow Bypass to be given the green light.

Mr Fox said: “Persistent congestion and pollution have been blighting this fantastic town for far too long.

“People’s lives are being hugely impacted by one of the most polluted roads in the whole of Wales, but we can address this by building a bypass to alleviate congestion.

“Granted, multiple bodies will be needed for the scheme to be given the go-ahead, but I urge the Welsh Government to take the initiative and commit to the infrastructure project to tackle air pollution.”

Cllr Paul Pavia, who represents Larkfield ward and is also the Cabinet Member for Education, said: “This road being gridlocked is too often a frequent occurrence. I dread to think of the huge swathes of polluted air that is being inhaled on a daily basis by the residents who live on this stretch of the road whom I represent.”

Cllr Christopher Edwards, who represents St. Kingsmark ward, said: “The people of Chepstow have been suffering far too long from this grossly unacceptable situation, where, quite frankly, the level of air pollution and traffic congestion is scandalous. We urge the Welsh Government to act swiftly by committing fully to a bypass.”

Cllr Louise Brown, who represents Shirenewton ward, said: “At present the situation is unsatisfactory. All citizens of Wales should be entitled to breathe clean air. Therefore, I fully support my own and colleagues’ calls for a Chepstow Bypass.”

And Cllr Jane Pratt, who is the Cabinet Member for Infrastructure, added: “Unacceptable levels of congestion and air pollution are hindering opportunities in Chepstow.

“But we can address this severe predicament with a bypass which would also unleash Chepstow’s true potential.”