Monmouth biker tears up Valleys track for a silver medal 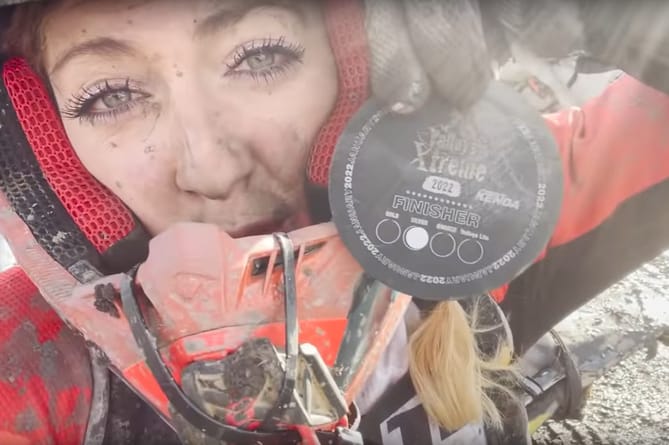 Monmouth's motorbiking superstar Vanessa Ruck, also known as The Girl On A Bike has brought home yet another medal. This time from the Valleys Xtreme 2022, at the Walter's Arena.

Valleys Xtreme claims to provide the hardest and most challenging riding in the UK Enduro calendar. Set in the Welsh Valleys over two days at Walters Arena, Valleys Xtreme offers a big challenge for professional and expert riders.

Running late to the event as a result of having to take care of a faulty killswitch, Vanessa prepared for the track the night before by watching video footage.

With the help of her husband, she signed up, kitted up and rolled out the bikes in time for a run on the prologue stages.

New Astra another hit for Vauxhall

The track features obstacles, such as skips, rocks, think mud, and 'terrifying stuff'.

Following the first timed lap is the fast lap, where riders battle it out for the fastest time. Performance on the fast lap determines her starting position for the race the following day.

Vanessa can be seen on the prologue tearing through thick mud between concrete and softer barriers around a treacherous and dangerous track.

Following the fast lap she said: "That lap was longer than I expected it to be, super muddy and sloppy, but fast."

“The fast lap matters for tomorrow, but I’m not really too worried where I start, I’m all about having fun. I have to pull up at that start line and do it three times. Not only do you have to do it once, you have to then go into it knowing what you’re going into two more times. Valleys Xtreme, you are evil, in all the right ways.”

Vanessa Ruck (A Girl On A Bike)

Checking out the track ahead, she scoped out five rows of placed boulders, which bikers had to tackle, puddles a foot deep, and hurdles made of tyres. She explained how when she reviewed the Neil Hawker track preview she was terrified, however scoping out the track from ground level allowed her to assess and strategise in a way she felt relatively confident about.

Back on the track with the other riders, she battled the obstacles as the sun was going down. A collision with another rider knocking her front tyre out almost caused her to retire early, but she powered on.

After the qualifying stage, she said: "I'm quite pleased that I survived it, I got around it, I think I actually enjoyed it in the end. I've got a broken gear shifter from where the guy rode into me."

On the morning of the race, Vanessa had found herself placing on row two, which meant she achieved a relatively fast time in previous day's qualifier.

After what she describes as a 'gruelling, beautiful' lap, she won a silver finish.

This win was a milestone for Vanessa, marking two years on from her very first race, which was also at Valleys Xtreme.

Vanessa's laps can be found on her Youtube channel (The Girl On A Bike).

Vanessa worked in marketing for 10 years when life took a devastating turn, cycling to work and being run over by a car jumping a red light.

She said: “Motorcycles, something I started post-accident, have become my love and passion. If you’d asked me seven years ago whether I would be racing off-road motorcycles I’d have probably choked on my drink! But life takes us on some amazing journeys. People can relate to my story because everyone goes through bad times and I think they’re cheering me on to keep doing better and better. Hopefully I am inspiring others to show that if I can bounce back after seven surgeries, others can get through their hard times.”

Last year the Beacon reported that Vanessa had been nominated for a national motorbike award for her creative content.

She said she couldn’t believe she was nominated in the same category as social media giant RoyalJordanian and would be thrilled if she did well in the competition.

Vanessa is an accomplished social media star, standing at nearly 30,000 subscribers on Youtube, gaining around 600 every month. Her channel pulls in around 60,000 monthly views.

The competitive Enduro Rally racer had just come back from the Rallye Du Maroc when bagged the prize. She thinks that it is because of the footage of her entering really challenging events or travelling to stunning countries, is why her videos on Youtube are energetic and inspiring.