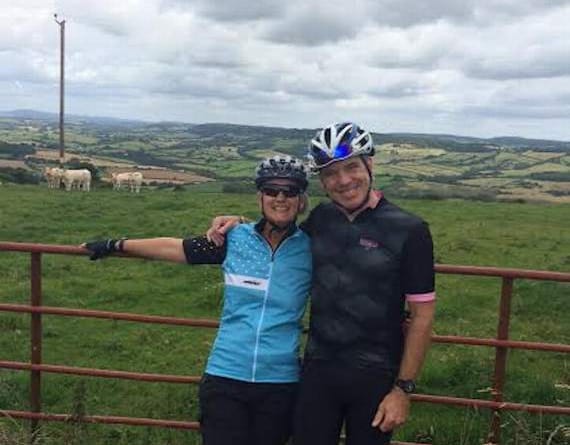 A MONMOUTH businessman is working hard to raise money for a charity close to his heart.

56-year-old Simon Baynes is getting ready to take part in the Prudential Ride London 100 race, held on Sunday 31st July.

The keen cyclist will take on 100 miles of closed roads around London and Surrey in an effort to raise as much money as possible for Breast Cancer Care after watching his wife battle the disease since being diagnosed in May 2015.

He said: “My wife Susie, after a routine mammogram, was told she would have to have surgery to remove small amounts of cancerous tissue.

“Despite a fear of hospitals and operations, she bravely went through three operations, however this wasn’t to be the end and we were advised that, as a precaution, Susie should undertake six months of chemotherapy, three weeks of radiotherapy, and 18 months of Herceptin (a three-weekly injection into the leg).

“Her journey is still ongoing but it was made easier with all the love and support of our amazing friends and family.”

Susan was recently given the news that she has beaten the cancer.

Simon is co-owner with Susan of sporting representation agency Big Sky Agencies, based at Singleton Court. He has been training hard for the event, regularly riding between 70 and 80 miles including taking part in the Iron Mountain Sportive in Abergavenny.

“He has been my rock and has supported me every step of the way, he came with me to every chemo session and helped me stay strong and positive so it came as no surprise to me that he wanted to give something back to Breast Cancer Care for the amazing kindness, dedication and support they gave us.

“In December when I was half way through chemotherapy he decided to sign up for the Prudential Ride London 100 and as cycling is his passion I knew that he would enjoy the training and the challenge. We are going up to London and will ride the Family 10K together on the Saturday and then Simon will complete the 100 mile challenge on the Sunday.

“I’m one of the lucky ones because of the excellent screening process my cancer was caught early and I have now been given the ‘all clear’.”

Simon’s original target of £600 is long behind him with a current total of more than £1000, but he wants to encourage as many people as possible to support the charity.