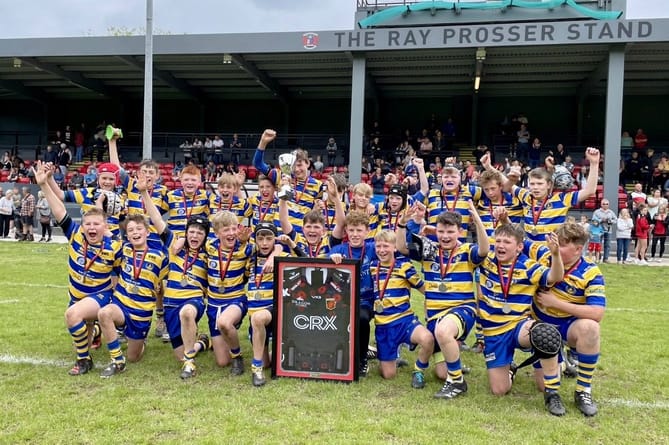 It was a case of shared honours as Monmouth’s young Tigers drew their Dragons Youth U12s Cup final at Pontypool RFC.

With the two teams having the meanest defences in the region, it was always going to be a tight game, so it was no surprise that either side was able to make a breakthrough in the first half, with the teams going in to the interval level at 0-0.

Pontypool United started the second half the brighter and finally opened the scoring five minutes in following a flowing passing move, which resulted with try in the corner.

Pontypool United added the honours with a retaken conversion, after the referee wasn’t happy with Monmouth’s charge on the initial missed kick.

This fired Monmouth up, who then upped their game and after a spell of sustained pressure finally got their rewards with five minutes to go when No 8 Lachlan Robbie peeled off the back of a dominant Monmouth scrum and out-muscled the Pontypool defence to score in the corner.

Fly-half James Lalley calmly added the conversion to level the game, which meant that the cup was shared.

Both sides had chances to win outright in the final minutes, firstly Monmouth missing an overlap when it looked like they would score before Pontypool United’s drop goal attempt with the last kick of the game faded wide.

Former Wales international Hallom Amos joined the Monmouth team in their dressing room celebrations after the game for what has been an extremely successful season for the Tigers.