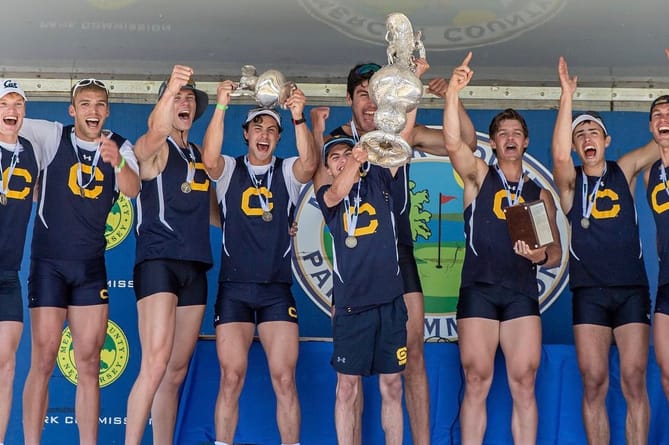 Iwan Hadfield, far left, and California crew with the US national crown

WYE rowing star Iwan Hadfield helped his California Berkeley rowing 8 to the biggest prize in US rowing as they finished their Stateside season unbeaten.

The GB U23 world medallist’s crew travelled across the country to East Coast New Jersey to land the Intercollegiate Rowing Association (IRA) varsity crown - recognised as the national championship.

The top 24 rowing programmes in the US contest the IRA, and the Old Monmothian’s boat were up against rivals packed with Olympic and international talent.

Tae Kwon Do students kick on with gradings

Cal had stretched out to a 3/4L lead at half-way, and they pushed on to hit the 1500m mark a length to the good.

The Bulldogs snapped at their heels in the closing stages, but the Bears came home 3/4L to the good in 5mins 44.2secs, Yale taking silver, Brown bronze another 1L back followed by Washington, Syracuse and Harvard.

With the Varsity Challenge Cup win, the Bears secured their 18th national championship.

And Iwan, who stroked the Monmouth School for Boys’ 8 to Schools’ Head and National Schools’ glory in 2019 will be targetting more silverware when he heads across the Atlantic to race at Henley Royal Regatta in two weeks’ time.

Meanwhile, back in the UK at the London 2012 Olympic lake, four Monmouth School boys stormed to silver racing for Hereford RC in open fours at the National Schools’ Regatta.

Dan Dutson-Smith, Henry Fraser, Ethan Chick and Alfie Winter were fourth through the 1500m three-quarter way mark, where Aberdeen in third were 1/2L ahead.

But in a storming grandstand finish, they caught the Scots and Westminster School in the last 20 strokes to take second behind King’s College School, beating the bronze time by just 0.09secs.

Racing for the Katrina Jacks Trophy, named after one of the school’s former rowers, they finished just 0.8 secs behind St Edwards, Oxford, with Wallingford in gold and Walton RC in silver.