Harry’s game, but it all proves a Bridge too far 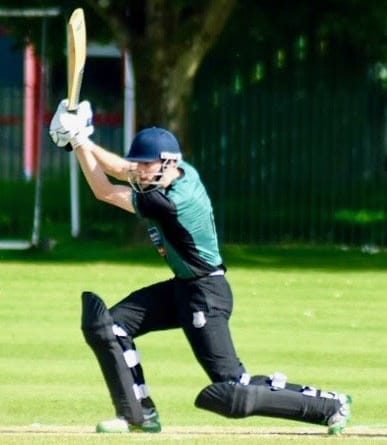 Harry Hughes hit a sparkling 57 on an otherwise disappointing day for Chepstow 1st XI as they fell to an 80-run loss at Cowbridge.

The visitors won the toss and elected to field in Saturday’s South Wales Premier Division Two clash, with the hosts setting a target of 221-6 off their 50 overs.

Aman Ghandi made hay in the sunshine with 89 not out, while Kameel Sahabdeen took two wickets and a catch and Tom Smith and Lewys Jones landed one wicket apiece.

Smith also secured a run out, as did Luke Watson who also took a catch off Jones’ bowling.

In reply the visitors struggled to get going, losing two wickets for 27, and were looking at a mountain to climb at 64-5.

Hughes had scored two at this point, and anchored the innings from then on, firing eight fours and a six in a whirlwind 42-ball knock.

But he couldn’t find anyone else able to trouble double figures, with the final man going for 141 in 36 overs.

Opener Jamie Rayner hit 58 for the 2nd XI, including nine fours, as they set visitors Newport CC 2nds a target of 216 all out off 45 overs in their Premier East 2nd XIs clash.

Skipper Jonathan Huws chipped in with 28, Tuhin Gavand with 25 and Aaron Jones with 20.

Three quick wickets after the city side had passed the half-century mark looked promising for Chepstow (60-3), but an 89-run fourth wicket stand and one of 62 for the fifth wicket (211-5) took Newport within reach of victory, fifth man Charlie Stewart scoring an unbeaten 96, backed by 64 from Abhijeet Ashokkumar.

Malith Madurasinghe landed two wickets for the hosts, and Rizan Mansoor and Bruno Chitnis took one apiece, including a caught and bowled for the latter, while wicket-keeper Huws snared two run outs.

Faced by a target of 321-5 off 40 overs, the hosts crumbled to 53 all out in 30 overs, Max Perry taking six wickets, and Kai Taylor, Harry Harkins, Finlay Saysell and Scott Williams a wicket each, while Dan Tyler took two catches.

But it wasn’t enough to secure victory, as the visitors raced to 197-3 with 10 overs to spare, largely thanks to an unbeaten 99 from their skipper Daniel Hay.

Oscar Watkins with 34 and opener Matt Hancock with 28 had earlier helped boost the Usk total, but five batsmen missed double figures, two falling for ducks, as the hosts struggled to break the Miskin attack’s shackles.

Freddie Wolfenden gave Usk hope though at the start of the visitors’ reply, snaring Chris Owen for a duck (4-1) before Ryan Jones caught fellow opener Carl Whiteley for five (19-2) off a Ben Jones delivery.

And when spinner Zafar trapped Glen Williams for five to make it three down for 33, things looked promising.

But the appearance of Hay changed everything, as he formed an unbeaten 164-run partnership with third man Tom Robinson, hitting 13 fours and a six in his 86-run knock to help secure a seven-wicket win, with the latter cracking seven fours in his 69 not out.

A battling 89 from opener Will Heath anchored the Llanarth 1st XI innings away to Radyr 3rds in Division 5 before they secured a tense nine-run victory.

Heath hit nine fours before holing out 11 short of a ton as the visitors set a target of 227-9 off their 45 overs, with Chris Page adding support with 30.

Radyr looked well on course to chase down the target at 120 without loss, but two quick wickets from Andrew Spencer and one from Dennis Heath suddenly made it 126-3, before the latter struck again to make it 135-4.

Radyr battled back to add another 41 runs, but two more wickets from Heath and two from Tom Heath made it eight down for 187.

There was still tension as the hosts inched towards the target without further loss, but tight Llanarth bowling saw them Radyr run out of overs on 218-8.

Piers Bisson took two wickets and Alfie Baillie and Will King one apiece for the villagers as the city side set a target of 212-6 off 40 overs, largely thanks to 84 by opener Greg Landon.

Gerry Stentiford with 23 and Dave Myatt with 15 added support for White in reply, but the last seven batsmen failed to trouble double figures and the innings fizzled out 45 runs short on 167-9.

But the hosts struggled in reply, all out for 83 in 28 overs, just Adam Malson with 25 and Mark Tucker with 14 reaching double figures in the Division 3 clash.

The merged 2nds side with Panteg also missed out by 38 runs away to Ebbw Vale 2nds in Division 9, dismissed for 171 in 39.5 overs after being set a target of 209 all out.

SR Rajesh struck 56 for Penallt & Redbrook and skipper opener Chris Margetts 50 as they set Herefordshire outfit Aston Ingham 3rds a target of 203-6 off their 40 overs in Division One West of the Cheltenham/Gloucester/Forest League.

Cameron Lee also scored 44 before the visitors were restricted to 130-7 for a 73-run win, Myles Ruck and Ross Williams taking wicket braces.

The 2nds were hammered by 226 runs at home to Woodpeckers 2nds, skittled out for 77, including five ducks, after being set a target of 303-9.

One shining light was Tommy Rowe taking four wickets and top-scoring with 23.