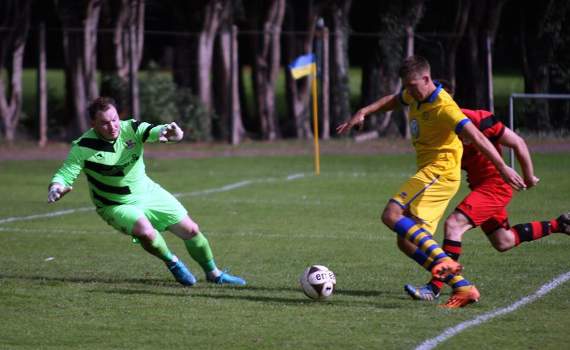 AT the sixth time of asking, Monmouth Town took all three points in a decent game at the Sportsground last Saturday.

With Blackburn still out and Matty Johns recalled, Town were at near full strength as Alderdice returned from his two match suspension but still looked decidedly shaky in the first twenty minutes having to rely on fluffed opportunities and some last ditch defending to deny the Buds. They attacked occasionally, with Harrhy having a goal chalked off for offside and Laurie crashing a point-blank header against the post.

Buds drew first blood as a long ball caught the defence square, and Johns had no chance with the finish. On the half hour it was all square as Alderdice headed home a corner before Harrhy and then Greaves gave the Kingfishers a flattering 3-1 half time lead.

The second half was competitive, with Buds again enjoying most of the possession and Town being guilty of giving the ball away far too frequently, but Buds lacked any real quality in the final third to make the most of their decent approach play.

Harrhy and MacDonald twice had chances to put the game beyond reach, but were unlucky or hurried in their execution. With just fifteen minutes remaining Loftus was withdrawn for Kareem who lasted a mere two minutes before being shown a red card for a headbutt without touching the ball and conceded a penalty to boot. Had the Buds striker shown anything like the composure he should have it would have been 3-2 with all to play for, but inexplicably his over complicated run up resulted in his kick flashing wide of Johns’ upright.

There was some more pressure from there and indeed Town could still have scored another on a breakaway but settled for the 3-1 win and all three points that lifted them five places up the table.

This Saturday, Monmouth, sponsored by South Hereford Garages and Furniture Importers with travel wear by Mandarin Stone, host former Champions League contenders Barry Town United in a 2.30pm kick off at the Sportsground. Barry are expected to bring their usual noisy support.