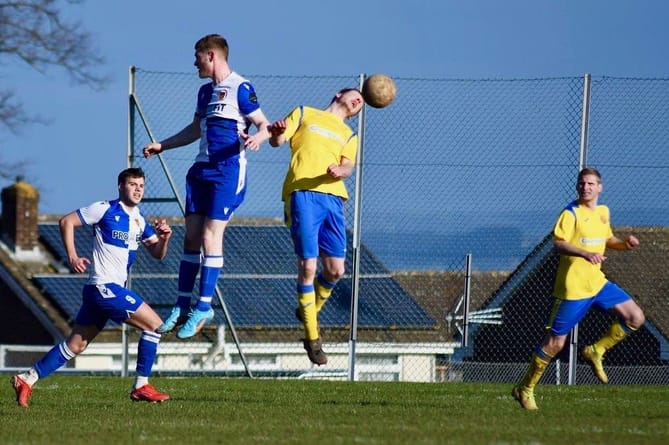 A CONTROVERSIAL ‘was it over the line’ goal and a leveller deep in injury time denied the Kingfishers all three points after dominating most of the game.

It was important for Monmouth to put in a good performance after last week’s disappointing cup exit, as confidence levels were hit by the Ynyshir Albions Trophy defeat.

They started brightly, creating good chances in the blustery conditions early on.

And the pressure told in the 20th minute when good link up play with Lewis Davies slipped in Rob Whitlock to curl a great strike left-footed past the despairing Chepstow keeper.

The Kingfishers pushed for more goals, dominating possession and creating yet more chances, 11 minutes later they doubled their lead, as an onrushing Davies ran into the box and drilled the ball across the keeper.

That was the half-time score, and the Kingfishers continued to dominate after the restart, carving out yet more chances but unable to find the finish to put the game to bed.

As the wind picked up the hosts went more direct, pumping long balls into the box looking for ways to break down what had been up to then a very solid back line.

With just nine minutes left on the clock a corner was swung in, initially defended by Monmouth before pin ball scramble saw a shot, half blocked by the defender and comfortably saved on the line by keeper Josh Ellis, only to then see that the referee had deemed that the ball had crossed the line to the shock and annoy the whole Monmouth team and coaches.

This was the break the Jockeys needed and the conditions meant it was very much game on.

And just as Monmouth looked to be seeing the game out in the final seconds up in their opposition’s corner of the pitch, they elected to throw a long ball into the box which was cleared long.

Poor defending on the half way line allowed a counter attack leading to a corner which was headed away by captain Ash Ford, only to see Daniel Whitehouse hit a wonder strike on the volley past the unsighted keeper to make it 2-2 with 97 minutes on the clock.

That resulted in wild celebrations from the home team and a look of despair from the Kingfishers, for whom Rob Whitlock was their man of the match.

Monmouth manager Scott Russell said: “To lose a goal at the death is heart-breaking.

“I felt we were the better team for the majority of the game but if you don’t put games to bed you leave yourself open to results like this.

“Give credit to Chepstow they kept battling and got the point I didn’t think they were going to get. But I am disappointed with the officials who got that decision wrong for their first goal – it hadn’t crossed the line in a million years, but that’s football, and I thought the officials were good throughout the game, so its disappointing that a moment like that changed the game. We didn’t see the game out like we should .

“However the performance was really good, our best performance in over two months, and I’m so gutted for the lads that they didn’t get three points.”