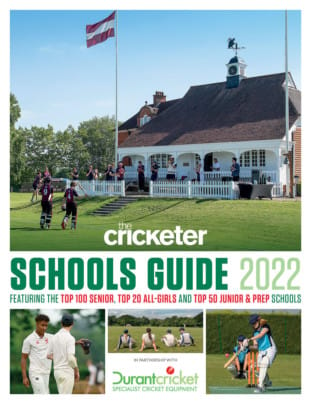 A SCHOOL is celebrating a hat-trick of success on the cricket field - after being included in the top hundred senior schools in Britain for the third year running, reports Nick Hartland.

Monmouth School for Boys is among the best in the country for cricket coaching, facilities and provision according to The Cricketer Schools Guide 2022.It has retained its status as the only Welsh school in the prestigious publication, which publishes its bumper 156-page supplement today (Friday, November 26).And it follows an exhaustive selection process which saw a huge number of schools submit entries to be included in the guide.All entries were judged against an extensive set of criteria, which included a compelling commitment to cricket in the curriculum, facilities, fixture programmes and coaching.Also taken into account was how schools kept the game alive during the pandemic, and how they look to ensure cricket remains a central part of school life."We are delighted that Monmouth School for Boys has been named, once again, in the top 100 senior schools for cricket in the country," said headmaster Simon Dorman."As a school, we have wonderful facilities, outstanding coaches and talented players."We are continuing to build strong partnerships with local clubs, both at recreational and professional levels."The school’s partnerships with Glamorgan, Cricket Wales, and Gloucestershire Cricket Board’s junior programme are continuing to flourish.Master in Charge of Cricket at Monmouth School for Boys, Callum Bassett-Jones, said: "We have an inspiring cricket community in which boys, girls and staff are passionate about the sport."Our winter training programmes are in full swing in preparation for another hugely anticipated and enjoyable summer of cricket."Head of cricket coaching James Boiling is a former Surrey, Durham and England A spinner.And the dedicated coaching team includes Old Monmothian and former Glamorgan and England opening batsman, Steve James, who is also working hard to develop girls’ cricket at Monmouth School for Girls.Cricketer magazine editor Huw Turbervill, said: "It has been incredibly heartening to see schools cricket making such a comeback after a very different 2020."Of course, not all schools’ programmes have been the same due to varying restrictions, facilities, and many other understandable reasons, but what has been consistent across the spectrum is that the dedication to the game in schools has, not only remained unaffected, but increased."Congratulations to all of the schools included and we look forward to hearing about all of your future successes."The guide is bumper-packed with the December issue of The Cricketer, available in the shops now.As well as appearing in print alongside the magazine, the guide will be available on The Cricketer website from Wednesday, December 15.