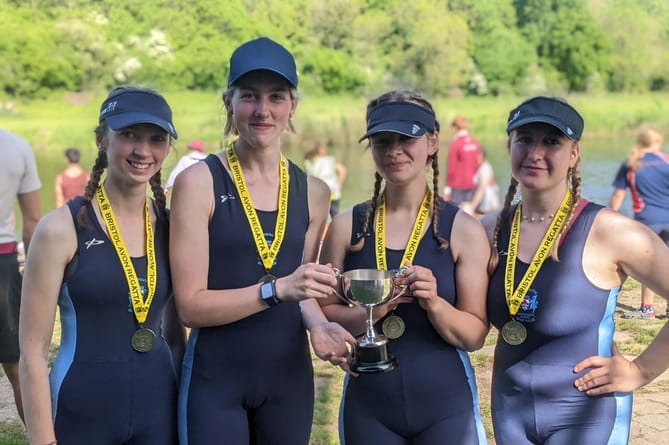 Junior Wye rowers headed to the River Avon where they made a big splash winning no less than five trophies.

Comprehensive club mates Beth Crossley, Laura Willis, Ella Miles and Megan Clifton put on a classy showing to beat Canford School by just over a length and Pangbourne by 2L in the final to take the girls’ J18 quadruple sculls.

And Tom Powell followed up singles victory at Evesham by taking the J18 men’s title with fine wins over Maidenhead, Christchurch by just over a length and Pangbourne by a distance in the final.

It was Tom’s third win of the season having also landed the junior quads at Evesham with club mates Jack Bufton, Elliot Lynch-Warden and Tom Coates, where Halle Unsworth and Harriet Morgan were also successful in girls’ J18 doubles.

Back at Saltford. Monmouth School for Boys’ J16 boat of Will Latheron, Phillip Lawler, George Whittal-Williams, Ben Holley and cox Ben Jennery, beat Monkton Combe’s B boat comfortably in their opener before taking the pots by just over a length from their A boat.

Monmouth School for Girls’ also launched four beginner quads in their first ever regatta experience. And their top two boats stormed into the band one final with wins over Avon and St George’s before the A boat of Grace Jones, Lily Ebsworth, Ailsa Whitehead, Freya Berglund and cox Lily Shilcock took the title.

Other races saw Monmouth Comprehensive’s girls’ U16 quad beat Pangbourne before losing out in the final by 2L to Maidenhead.

Monmouth School for Boys’ U18 four beat Canford in their opener before losing out to Pangbourne by 3L, while their two U14 quads lost out narrowly to two Avon boats.

The school missed out by 2.5L to Pangbourne in U18 8s, while the J14 octuple and J15 coxed both missed out to St George’s.