Save our pub plea 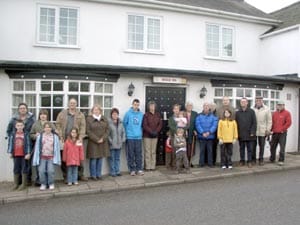 THOUSANDS of protestors, including parents and children, Young Farmers and businesspeople, will be marching through Hereford next Wednesday (February 13th) to protest against school closure proposals. Amongst the marchers will be parents and pupils from Whitchurch and Llangrove, two schools under threat following proposals by Hereford LEA to close and amalgamate 35 primary schools in the county by September 2009, re-opening 17. Due to the huge outcry from teachers, governing bodies, parents and members of the community, as well as the Council Cabinet stating that it could not support the draft changes, the council was forced to recall the proposals on the 21st January. Chris Bull, the Chief Executive of the council, has suspended the initial consultation period, which was due to end on the 21st March. In the meantime, he stated that the council intend to 'bring in external verification of statistics, figures and finances, share those findings with everyone and listen further to school communities before re- drafting the proposals for further consideration. However, Herefordshire Against Closing Schools (HACS), an organisation set up to fight the proposals, fear that whilst the initial proposals have been recalled, the main issues have only been delayed. 'Two mothers who formed HACS, Jane Ward and Eugene Gooch, whose children attend Whitchurch C of E Primary School, said: "It is just as important to hold the Rally now as it was when the proposals were first issued. The Council are saying that the proposals have been withdrawn, when in fact, HACS knows that Council officials are already implementing them by refusing places at schools on the closure list to parents who request them. "Other parents have started to withdraw children from schools marked for closure, and this just leads to the Council's plans winning through the back door." "Everyone responsible for these plans must be left in no doubt that the people of Herefordshire simply will not accept any proposal that means the decimation of education in Hereford. "HACS encourages any member of the public who cares about their local area and community to join the thousands that are expected to attend and to bury these plans once and for all". "HACS will continue to fight for as long as it takes to ensure that the Council and the LEA realise that it's the children and the community that matter, not the bottom line on a balance sheet." Recent proposals suggest that both Whitchuch and Llangrove schools would be closed and a new school opened at the Whitchurch site. St Weonards and Garway primary schools would also close and a new school would open on the Garway site. "If Llangrove and Whitchurch School amalgamate, whichever site they move to they would have far too many children for the capacity of the building," Jane Ward told the Beacon. "we estimated that a possible 50+ children would need to be housed in temporary buildings until the school was extended, if that ever happened. "There seems to be a total disregard for the feelings of the communities that this process would rip apart; nobody seemed to consider what upset this would cause the children. "As a parent I feel I have been blessed with being able to place my children in such a wonderful environment, " Jane added. "It's the staff that make a school not the building, destroy the staff and you destroy the school. and so it goes on." The The start point for the Rally is the Merton Meadow car park, behind Hereford Football ground, with rally-goers meeting at 10am, ready to commence the march at 11:am.

Theft of stone from church wall