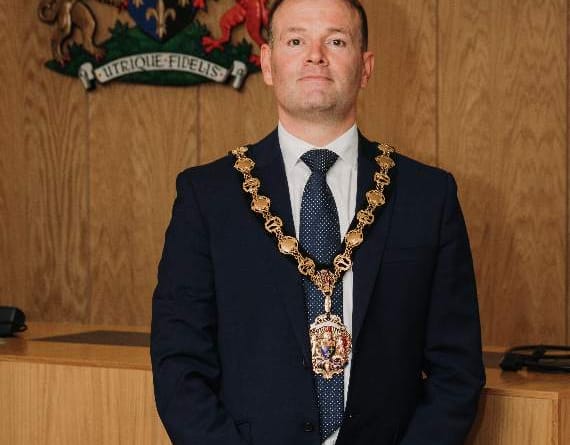 At Monmouthshire County Council’s annual general meeting on earlier this month, Councillor Mat Feakins was confirmed as the council’s new Chairman to serve for the next 12 months.

Councillor Fox said: “Cllr Mat Feakins has proved himself as an excellent member of the council.

‘‘His keen interest in Monmouthshire’s community and his astute business acumen has been a great asset to this county.

‘‘He has been held in high esteem by Monmouthshire residents during his recent role as Mayor of Monmouth.

‘‘Mat is a man of many talents and experience. He will be an excellent ambassador for this county.”

This will be Councillor Feakin’s first time as Chairman following tireless work within the Monmouth community.

Mat has recently served as Mayor of Monmouth Town Council and has been an active councillor for a number of years, championing the rights of residents and pursuing the goals and aims of local businesses.

Following the announcement, Cllr Feakins said: “I am delighted to be elected chairman and look forward to the next 12 months in which time we hope to be through the worst of the pandemic.

‘‘I wish to convey my sincere thanks and gratitude to all those who have worked tirelessly to get us through this significant period of time, from those in the fields to those on the medical front line, from those in the recycling and waste department, in social care, and to the team that deliver meals on wheels across the county.

‘‘We could not have got through this without the dedication of team Monmouthshire County Council.”

Born in Carmarthen and schooled in Somerset, Mat has always been a team player, enjoying the first XV, first XI and county squad for athletics; returning to the family farm just outside Monmouth for ten years before leaving the country to pursue his ambitions.

One of the very early pioneers of the internet, Mat migrated to the Caribbean and established one of the very first internet lotteries in the world.

Whilst there he also established several related companies to include an on-line payment gateway and offshore bank. He later swapped the tropical climate and island life for a new venture offering offshore legal services in southern Spain. Returning to the UK for family reasons, Mat had to essentially start over and quickly set to work as a labourer on a building site, hodding bricks and carrying blocks.

Saving up over a number of years, he trained as an electrician and quickly grew an electrical contracting business, which blossomed into renewables and culminated in becoming the principal contractor on over £70m worth of solar PV development across the UK, building out over 500,000 solar panels, which continue to provide electricity for over 50,000 homes.

Mat continues to be actively involved in renewables and energy and has since returned to his roots in farming in Monmouthshire.

Leaders of the council’s political groups paid tribute to the work significant work performed by outgoing Chairman, Councillor Sheila Woodhouse, on her two years of office.

“Cllr Woodhouse chaired the council through the unprecedented times of the Covidpandemic and through the storms which have affected Monmouthshire’s communities, continuing to be incredibly kind and caring and supporting others through some very difficult times,” said Councillor Fox said.

Cllr Feakin’s charity for the year will be The Prince’s Countryside Fund and his Chaplain will be the Venerable Cherry Vann, Bishop of Monmouth. Councillor Ann Webb has been confirmed as Deputy Chairman of Monmouthshire County Council.