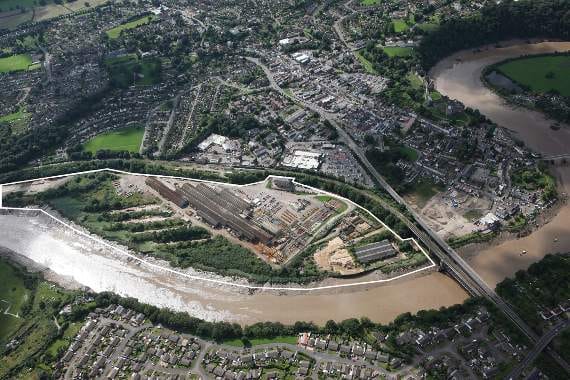 PLANS to transform a former shipyard into a new neighbourhood with 345 homes, offices and a riverside park have been lodged with Monmouthshire council, alongside a separate application for a further 200 homes.

A reserved matters application has been submitted for the redevelopment of the former Mabey Bridge site in Chepstow.

And as many as 200 homes could be built on land at Bayfield in Chepstow under plans submitted to Monmouthshire council.

Both developments, submitted by developer Barrett Homes, have drawn a number of objections.

Outline planning permission for the development on the Maybe Bridge site was approved by Monmouthshire County Council last year, despite concerns about a ‘lack of affordable housing’ in the plans.

The development would include a range of homes including apartments, houses and some sheltered accommodation for the elderly.

New offices and commercial leisure facilities would also be built on the 41-acre site under the plans submitted by Barratt Homes.

A total of 237 of the homes would be three-bedroom, 82 four-bedroom and 26 would be two-bedroom homes.

Barratt Homes says this reflects the high demand for family housing in Chepstow.

The development would also come with 901 parking spaces, including 18 for visitors.

A riverside park including a community orchard and play areas would also be built on the site which lies on the banks of the River Wye.

The proposed redesign of Bombardon Square is based on the floating Bombardon structures which were used to protect Mulberry Harbours during the invasion of Normandy in 1944.

The Mabey Bridge shipyard was one of the main centres around the UK where these were manufactured.

But a multi-use games area which was approved in the masterplan is not included in the new application due to a “third party land constraint.”

A total of 1.5 acres of land is provided for affordable housing and 1.2 acres for employment land.

The application also aims to maintain that the grade-II listed Brunel House remains a dominant feature of the area.

The former mill building will be retained in the plans and converted for either commercial, residential or community use.

Concerns have been expressed since the plans were outlined, with several objections lodged.

Objectors have voiced concerns over the impact of the proposals on traffic issues and pollution in Chepstow, while also questioning if there is sufficient infrastructure in place for the development.

“The building and introduction of 345 homes/families is a ridiculous pressure to put on current infrastructure and public services,” one objector writes.

Another says the development would “literally choke what is already a congested area.”

Others have said they support the application due to the need for housing but that work to improve roads and infrastructure in the town is needed first.

Meanwhile the Bayfield site is made up of three fields with a derelict barn, located between the AONB to one side and the ‘built form’ of Chepstow to the other.

Up to 200 homes could be built, including 35 per cent affordable housing, with the exact number to be revealed when a reserved matters application is put forward with more detail on the plans.

A statement from Barratt Homes says: “The residential development will provide a range and choice of high quality housing, including affordable homes which will be set within an attractive landscape led environment, with building forms which respond to local character and the site’s context.

“As a result, a new positive development edge and transition to the adjoining Area of Outstanding Natural Beauty will be created.

“The provision of a green corridor and green spaces will cater for local residents, promoting healthy, happy living.”

Highways improvements, including creating a new vehicular access off the B4235 are also outlined.

A planning statement says the plans would not change the relationship between the AONB and the settlement.

Much of the housing would be located on lower ground, where it is not visible from the majority of the AONB, it said.

“The proposed residential development would appear as a minor extension of the built edge and not as an isolated new development,” the statement says.

A ‘substantial landscape buffer’ would also be created along the boundary with the AONB.

MP for Monmouth David Davies has called for assurances over the impact on highway capacity and air quality, since the plans were lodged.

In a letter to head of planning at the council, Mark Hand, he said: “There are fears that the large number of houses being proposed will significantly impact the local infrastructure as roads in the area are already highly congested and will also affect pollution levels.”