New look park is a big hit with local children 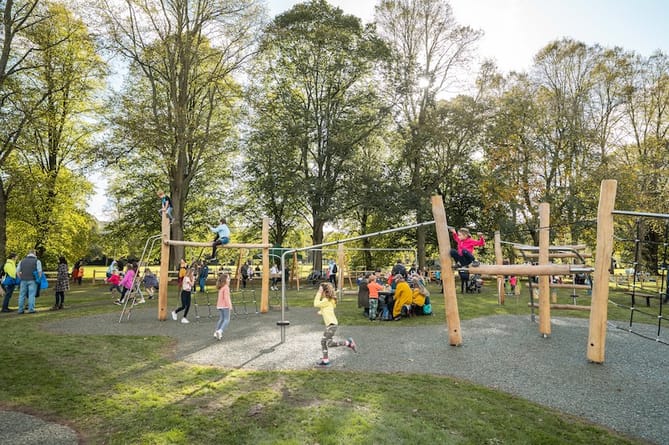 YOUNGSTERS in Monmouth have had a great time during half-term making use of the new play park which officially opening in Chippenham fields last month.

Theft of stone from church wall

The opening was held on Monday October 25 and involved many families, Monmouthshire’s Cabinet members and Chairman, representatives from the Monmouth Rotary Club and members of Chippenham Mead group.Thea Banks and Alba-Jae Phelps, granddaughters of two members of staff from MCC who were involved in putting the park together, were two of the children involved in the ribbon cutting ceremony. Speeches were also heard from MCC chairman Mat Feakins, cabinet members Lisa Dymock and Jane Pratt and Councillor Rachel Jupp from Mounmouth Town Council.Speaking at the official opening, cabinet member for open spaces, Councillor Jane Pratt said: "This new playground follows years of extensive work by Monmouthshire County Council and partners and is a testament to our commitment to providing inclusive spaces that everyone can enjoy. ’’It’s been wonderful seeing families and children enjoy the new equipment today. It’s an area that not only provides a fun place to visit but the wooden play equipment fits perfectly with the environment while encouraging play through the exploration of nature." Councillor Lisa Dymock, cabinet member for community wellbeing and social justice added: "Providing our communities with spaces just like this is important in helping our children learn through play and sparking their adventurous sides. ’’This space has been carefully crafted to ensure the needs of all residents, no matter their ability, can be met. I would like to thank Monmouth Town Council, Friends of Chippenham Mead, the Wye Valley Area of Outstanding Natural Beauty and the general public for their continued support throughout the process." In addition to the renewal of the Chippenham play area, this year the council will renew the play areas at King’s Fee, Goldwire Lane and Hendre Close and will also be undertaking extensive works to many of the smaller play areas on the Rockfield Estate to create a number of community nature spaces, which include new landscape features and some wild play elements. When all these works have been completed, the council will have spent more than £420,000 on the various fixed play sites in Monmouth in the 2021/22 financial year.Becoming more eco-friendly, Monmouthshire County Council moved away from the traditional metal materials used for play parks. The sustainable hardwood used in this new park brings children closer to nature while creating a safe and long-lasting environment. The slide from the original park was also used in the new park. Instead of wasting the existing functioning slide, the council revamped, recycled and placed the old slide into the new park.Rhiannon a parent of two who attended the opening said that she feels there is "something here for everyone." The council intended for this park to have inclusivity throughout. From the adapted equipment to the different age targeted equipment, they wanted to ensure that this new park was a place for all children to enjoy. Parent and children’s feedback at the opening showed that the aim was achieved and appreciated. Initially, the old park was going to be refurbished however due to representations from many members of the community, the park was relocated to its more central position. The traffic fumes, noise and the danger due to the original park being located by the A40 dual carriageway has been the crucial factors to making this decision. The new position allows a safer, more accessible location for the children to play. Further funding and grants were obtained from The Wye Valley Area of Outstanding Natural Beauty and Monmouth Town Council which allowed the project to go ahead despite the expected cost being £156,000. The overall expected cost includes the complete restoration of the old park in order to get it back to its natural state. The council will also be refurbishing other parks around Monmouth including play areas in Kings Fee, Goldwire Lane and Hendre Road as well as many smaller parks on the Rockfield estate. By the end of the 2021/22 financial year, over £420,000 will have been spent on the renewals of play parks in Monmouth. Alongside the park opening, the third drinking water fountain was also opened on Monmouth’s Chippenham Fields on Monday. Councillor Jamie Treharne and Rotary Monmouth Community Champion member Roger Finn held the opening ceremony for the fountain with help from two volunteering children. This fountain is one of four projects around Monmouth and was said to cost around 12-13k. Monmouth Fountain schemes aims to provide the public with clean drinking water while simultaneously reducing the amount of plastic waste generated around Monmouth. The Green Wall water fountain Project at the Blestium Street Toilets was the first to open. It was opened in August 2019 by then Town Mayor, Richard Roden. It was designed to fit alongside the flower wall created by Monmouth Rotary Community Champions. The second fountain was opened in September of this year and was part of the Monmouth "Action on the Climate Emergency." The scheme aims to reduce single use plastic bottles, reduce rubbish at the skate park and encourage the drinking of water by young people.Monmouth Fountains Scheme’s fourth and final project is to renovate the Diamond Jubilee Fountain at St Thomas’s Church. Unfortunately, the fountain requires urgent attention to avoid it falling into disrepair. As a key element of Monmouth’s heritage Monmouth’s Rotary club are keen to restore fountain and allow it to become a much-loved community asset. The total project is estimated to cost around £50/60k. Along with the theme of the previous water fountains, the project aims to transform Monmouth into an environmentally friendly community by promoting the reduction of plastic waste. Both projects which opened on Monday October 25 are further steps towards an environmentally friendly, inclusive Monmouth.