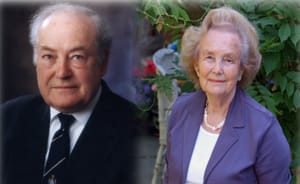 THE University of Surrey has confered the honorary degree of Doctor of the University to Sir Ray Tindle for his services to the newspaper industry. The award was made at Guildford Cathedral. After the Second World War, a young Ray Tindle joined his local newspaper in Croydon as what he himself described as "general dogsbody". Little did they know that, while serving in the war with the Devonshire Regiment, he had already completed his apprenticeship by launching his first title on a troop ship. A print strike in 1950 presented an opportunity for Ray to widen his experience prior to buying his first paper, the struggling Tooting and Balham Gazette, paid for by his £250 post war demob payment. Turning its fortunes around, he continued to take on more so called "unsaveable titles", as well as starting up new ones, and so he built the empire that is Tindle Newspapers, based in Farnham, Surrey. The business has grown to include more than 225 printed titles and several radio stations, with a combined turnover of over £66m. Sir Ray was awarded his Knighthood for services to the newspaper industry in 1994. His contribution to local communities and education has also been invaluable. Sir Ray was founder of Tindle Enterprise Centres for the Unemployed, is a supporter of Frimley Hospital and also set up the Sir Ray Tindle Journalism Scholarships. His involvement with the University of Surrey during the sixties and seventies was both significant and selfless. He was heavily involved with Surrey during its formative years, serving on the University's Council and chairing the Project Planning Sub Committees that oversaw the University's establishment in Guildford. LADY Tindle, the wife of our owner, Sir Ray Tindle, has received an MBE in the Queen's Birthday Honours List. She has received the award for her voluntary services to the community in Farnham, Surrey, where the head office of Tindle Newspapers is based. Lady Tindle, who retired last year after 20 years of teaching English to adults with learning difficulties, operates a charity shop in the town. The shop, which marks its 20th anniversary in August this year, has raised more than £200,000 for a multitude of causes. Looking forward to her visit to Buckingham Palace, Lady Tindle stressed "I feel it is a very great honour. My only misgiving is that so many other people deserve it. "All the hard work I do relies very heavily on volunteers and I would like to feel that I am accepting it as much on their behalf as on my own".