‘Enough is enough’ over river pollution 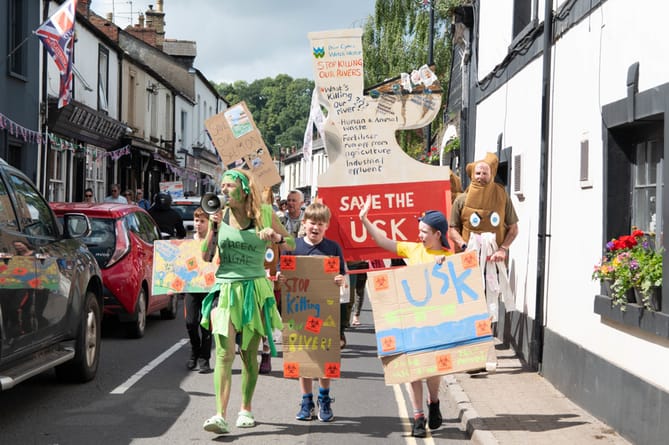 Over 200 people took to the streets of Usk on Saturday June 11 to protest against the increasing risk of pollution to the River Usk.

Organised by River Wye and Usk campaigner Angela Jones, protestors marched through Usk with ‘Save the Usk’ banners and signs.

This comes after a report by Natural Resources Wales (NRW) from February 2022, found that the River Usk had the highest incidence of phosphate pollution among Wales’ nine river Special Areas of Conservation.

The report found that sampling on several stretches of the River Usk saw an 88 per cent phosphate failure rate, whilst the neighbouring River Wye recorded a 67 per cent failure rate – equal second worst behind the Usk.

Fertiliser run-off from agriculture, human and animal waste and industrial effluent have been linked as causes of high phosphate levels in rivers.

Saturday’s march in Usk saw a wide range of the people come together including Town Mayor Meirion Howells, local WI members, schoolchildren, councillors and fishermen to protest against the ongoing state of their rivers.

River Usk campaigner Angela Jones has previously held similar protests against river pollution of the Usk and Wye in the neighbouring towns of Monmouth and Abergavenny.

Angela Jones said: “I would like to thank everyone for lending their support to this protest march, we had a fantastic turnout and it was great to see so many people of all ages engaged in protecting their local rivers.

“Enough is enough when it comes to polluting our rivers and we will not tolerate our rivers being used as open sewers by Dwr Cymru Welsh Water, and together we will bring change.”