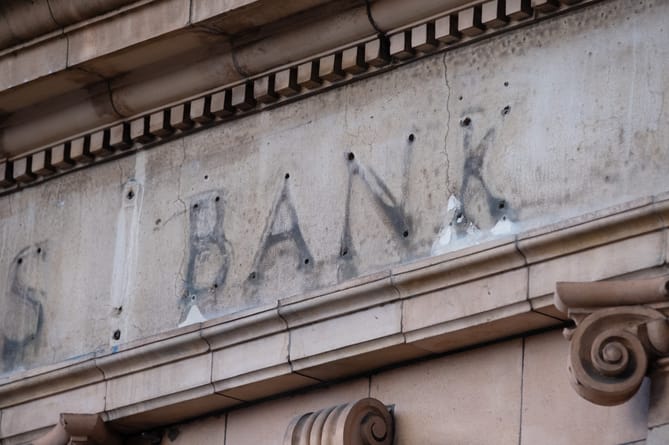 Banks have closed across the county (PA )

More than a third of banks in Monmouth have closed since 2015, new figures show.

Analysis from consumer champion Which? has shown a sharp decline in the number of bank branches open in areas across much of the UK compared to seven years ago.

According to figures up to the end of April, eight banks have been shuttered in Monmouth since the start of 2015, leaving 13 remaining in the area.

Separate figures from LINK, a cash machine network, show there has also been a decline in the number of free-to-use ATMs across the UK in recent years.

Their data shows that between the start of 2018 and early March this year, the number of ATMs in Monmouth dropped from 59 to 50.

The Monmouth branch of HSBC is to close in July as part of a nationwide closure programme.

The group, which is the second largest bank in Europe and took over the Midland bank in 1992, is to close 69 branches across the UK, affecting around 400 staff, as customers shift to online and mobile banking.

It follows the closure in Monmouth of another HIgh Street bank, Barclays, who left in June 2021.

Out of the ‘Big Four’ banks, just Lloyds is left in Monmouth.

The lender said the shift towards online and mobile banking had accelerated since the start of the pandemic.

In January 2021, it shut 82 branches for similar reasons.

HSBC said that it hoped to redeploy staff affected by the latest announcements to other roles within the bank.

They will be left with 441 UK branches after the closures, it said, though only 96 offering a full range of services - mainly based in large cities and towns.

There will also be 172 cash service branches, offering access to cash alongside basic counter services as well as dealing with some other more complex issues, plus 173 counterless digital service branches using self-service technology.

HSBC said none of the planned closures were ‘the last bank in town’.

Jackie Uhi, head of HSBC UK’s branch network, said: “Our branches continue to support people with their more complex banking needs, but the way we can do this has also evolved, with the addition of banking hubs, community pop ups and continued use of the Post Office network.

“We know that the majority of our customers have a preference to do much of their day-to-day banking online or via mobile, so we’re removing locations where we have another branch nearby, and where there is a significant reduction in customers using face-to-face branch servicing.

Referring to the UK bank closure figures Which? chief executive, Anabel Hoult, said: “While the pandemic has accelerated the move to digital payments for many consumers, many are not yet ready to make that switch and require protection from an avalanche of ATM and bank branch closures that have left the UK’s cash system at risk of collapse.”

A bill to protect access to cash was announced as part of the Queen’s Speech in May.

The Treasury says the new legislation will ensure “continued access to withdrawal and deposit facilities across the UK”.

Economic secretary to the Treasury, John Glen, said: “We know that access to cash is still vital for many people, especially those in vulnerable groups.

“We promised we would protect it, and through this bill we are delivering on that promise.”

Full details on what will be included are yet to be published.

Which? welcomed the bill but said it “must ensure that clear requirements are placed on industry to meet communities’ need for cash”.

Its data found that nearly half (48%) of bank branches across the UK have closed since the start of 2015, and seven constituencies have seen every one of their bank branches closed in recent years.

Recent research by the Royal Society of Arts estimates 10 million people in the UK would struggle in a cashless society.

The research suggests the elderly and those in areas with poor mobile or broadband connectivity have suffered most in the move to digital banking.

RSA researcher Mark Hall said: “For millions of people, their relationship with cash is critical to the way they manage their weekly budget.

“It’s vital that the dash to digital doesn’t disenfranchise anyone, especially with the cost-of-living crisis putting such significant strain on family finances right now.”