A sweet taste of victory for beekeeper brothers 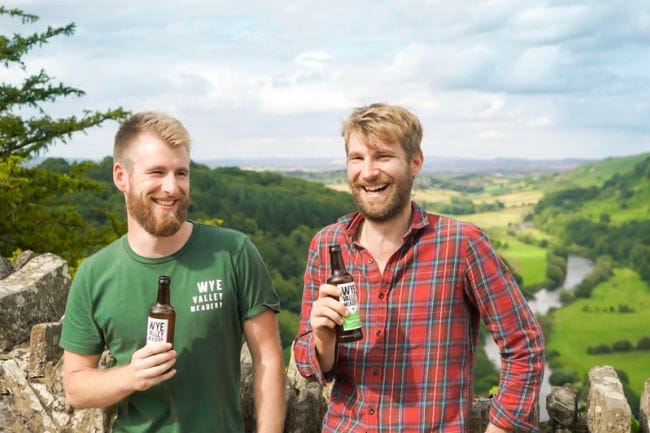 TWO beekeeping brothers who use honey to make mead created a buzz in a national competition, scooping first place and a prize worth £50,000.

Matt and Kit Newell raised a glass of their sparkling flavoured drink to success at the BrewLDN Brew Accelerator craft drinks festival at Printworks in London.

And the prize of a year’s mentoring and guidance will help them expand their Caldicot-based Wye Valley Meadery business nationwide and overseas.

The delighted duo, who first launched their business in Chepstow just three years ago, posted: “We are overjoyed to announce that we are the 2022 winners of the BrewLDN Brew Accelerator programme.

“We had nine days to prepare for this event, to design and order the stand, package our meads and Pollen Pale into keg (a first for us!) and hastily assemble a wonderful team of helpers. Somehow we smashed it.

“This is going to be a huge boost to our business with expert consultancy on hand whilst we make some important business and product decisions over the next 12 months.

“We had some very stiff competition from the other wonderful finalists – Fauna Brewing, Flowerhorn Brewery, Better World Brewing.

“Thanks again to the team at BrewLDN for putting on such a great event and inviting us. “Thanks also to everyone who came to our stand and tried our meads and honey beers.

“Keep a look out for our new mead made in collaboration with Wild Weather coming soon.”

Brew Accelerator is a competition designed at supporting and encouraging start-ups in the hospitality industry, covering craft beer to spirits, and hard seltzers to no-lo firms.

A spokesperson said: “Wye Valley Meadery took the top spot this year due to the fact they are a small, family-run company founded by two brothers and based in the Welsh borders.

“Combining their love of nature with interest in brewing, the brothers set out to create something as original as possible by taking the world’s oldest form of alcohol, and giving it a modern twist.

“With mounting quantities of honey from our their own bees and a desire to drink something different, they began creating session strength meads made with great ingredients and delicious flavours.

They have created a drink that is innovative, light, refreshing and rich in flavour, but also steeped in history. A true blend of old and new.”

Matt first took up beekeeping as a teenager 18 years ago after meeting St Briavels beekeeper Doug Isles at the Forest Food Festival.

He set up the meadery in Chepstow at the start of 2019 while he was out of work, using honey produced by the bees he kept as a hobby, turning his passion into profit making Europe’s oldest known tipple with brother Kit.

Moving to bigger premises in Caldicot’s Severn Bridge Industrial Estate last year, including a tap room, the business doubled its turnover during the pandemic through online sales and appearances on the likes of BBC’s Countryfile.

And thanks to shows like Vikings and Game of Thrones popularising mead, and with an appearance on The Hairy Bikers to come later this year, the business is now moving into producing kegs and cans for on-trade.

The meadery currently produces 4,000 litres of its sparkling flavoured drink a month, which has a four per cent alcohol content.

Further plans include opening an off-site mead bar and exporting to the Far East and Eastern Europe. For more information, see www.wyevalleymeadery.co.uk and www.facebook.com/WyeValleyMeadery