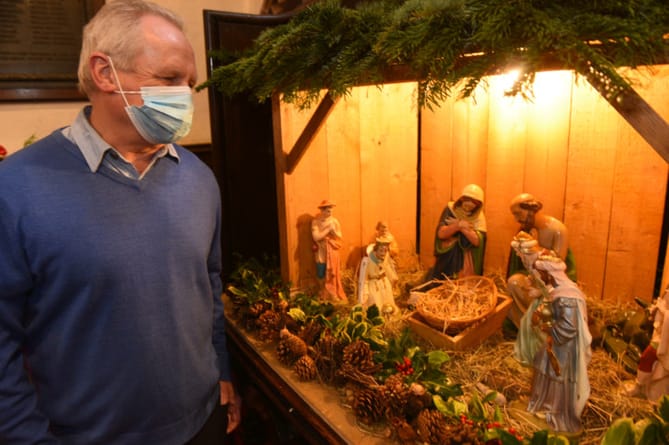 A VINTAGE figurine that played a central part in a church’s nativity scene has been stolen.

The 60-year-old porcelain figure that represented the baby Jesus was part of a set which included Mary and Joseph and had been central to the nativity scene at St Thomas’ Church for at least 60 years.Sometime after the church was unlocked at 9.15am on Tuesday January 4 and before 11am, a person, or persons, had entered the church and committed some minor acts of vandalism and apparently had removed the figure out of the nativity scene.A frantic search for the figure was made in the hope it had been hidden or discarded within the church but to no avail.Member of the PCC, David Price, whose father had been the vicar at the church in Overmonnow for many years, said that the theft was spotted when one of the ladies who went in, noticed that the clanger on the small brass bell hung by the door had been ripped out, some of the flowers in a display had been pulled out and the ancient wooden font cover had been moved."Then she saw the crib in the nativity scene was empty and looked around to see if it had been put somewhere else" he said."It had been used every Christmas for decades, as long as I can remember" he added.He went on to say that the church had been used to getting low-level anti-social behaviour, usually over the school holidays, "but the last six months we have been getting stuff moved around, plants and such-like". But he said they were determined not to close the church and moved some things to avoid any thefts."We are usually very lucky as a lot of people pop in and out, the local business’s keep an eye on the place, but this loss is sad; the nativity scene has been used for decades and something like the baby Jesus, along with the matching Mary and Joseph figurines which were used in my dad’s time and before, had survived all those years without any problem"."We see the odd apple disappear at harvest time and hope that it’s gone to a good home but this is just disappointing to upset people."As we took all the decorations down from the Christmas tree, we carefully looked to see if it had been hidden there, but sadly not, whether it’s gone in the river or someone has chucked it somewhere, we will never know."If somebody does come across it, it would be lovely to have it returned, that’s our outside hope" he added.They don’t want to have to close the church altogether, and installing CCTV in a place of worship where individuals go in for solitude and prayer "would not be right".The nativity scene is still there inside the church and if anyone does find the figurine and wishes to remain anonymous, the church would be grateful to see it back in its place.The theft has been reported to the police who said: "We received a report of theft at the Church of St Thomas the Martyr after a figure was allegedly taken from the nativity scene at some point between 10am and 11am on Tuesday, January 4."